You are here: Home / 1979 Iranian Revolution in Pictures

This page goes into the details about the Iranian Revolution which occurred in 1979. 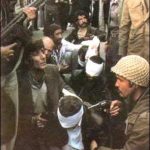 In which John Green teaches you about Iran’s Revolutions. Yes, revolutions plural. What was the1979 Iranian Revolution about? It turns out, Iran has a pretty long history of unrest in order to put power in the hands of the people, and the most recent revolution in 1979 was, at least at first, not necessarily about creating an Islamic state. It certainly turned out to be about that, but it was initially just about people who wanted to get rid of an oppressive regime. Listen up as John teaches you about Iran’s long history of revolution. 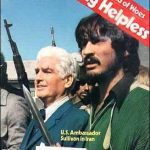 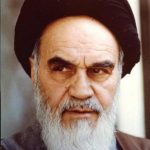 19
On the day of the revolution, people cheer in the streets near Tehran University.
February 11, 1979 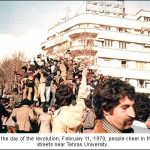 18
An Iranian ‘Immortal’ from the Shah’s Imperial Guard is wounded during an attack by revolutionaries on Tehran’s broadcasting building.”
February 1979 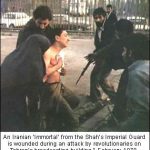 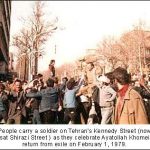 16
Ayatollah Khomeini returns from exile on an Air France flight from Paris to Tehran.
His son Ahmad looks on. 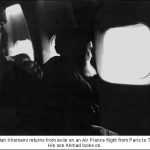 15
Slogans on the back of an ambulance in Tehran: “The only path to liberation is armed struggle”, “People arm youselves”, “Death to (Prime Minister Shapour) Bakhtiar”
February 1979 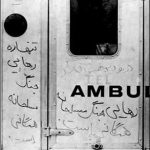 14
A demonstrator shot by Army soldiers in Tehran is rushed to a hospital.
Early February 1979 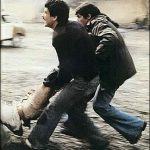 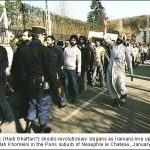 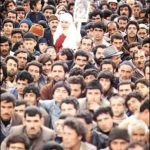 11
Anti-government demonstrators in Tehran set fire to portraits of the Shah and his family. 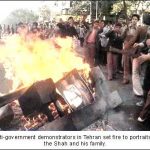 10
Statue of the Shah being torn down by university students in Tehran.
November 1978 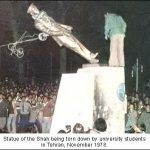 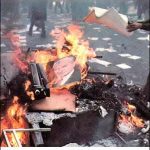 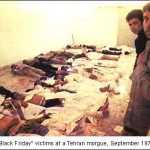 7
Prime Minister General Azhari (second from left) introduces his cabinet to the Shah. 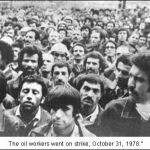 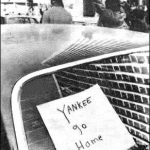 4
A wall in Tehran, 1978: “Kings are the disgrace of history; you are the most disgraceful king. Death to Imperialism. 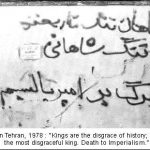 3
Iranian students in the U.S. demonstrate near the White House during Mohammad Reza Shah’s official visit to the U.S.
November 1977 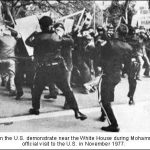 2
A protestor confronted by police during demonstrations against the Shah’s visit to the White House.
November 15, 1977 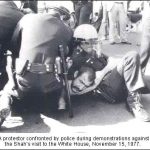 1
Mohammad Reza Shah and Farah Pahlavi on the White House lawn while President Jimmy Carter delivers a speech.
The Shah is affected by tear gas thrown by the police to control anti-Shah demonstrators in front of the White House.
November 15, 1977 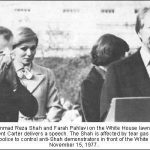